I’ve actually been rocking and rolling through books this summer, and this one’s a good one. I actually sat at the Hubbard Avenue Diner for over two hours finishing it, and was nearly in tears by the end. It was a random pluck from the shelves at the bookstore, Allie and Bea by Catherine Ryan Hyde. 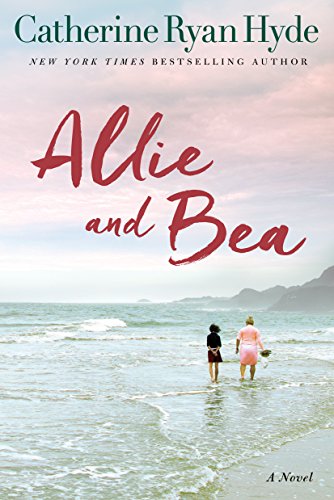 I expected it to be a sweet and sappy story, a la Jennifer Weiner or Jodi Picoult. It was, and yet it wasn’t. Before reading Allie and Bea I was not familiar with Catherine Ryan Hyde but I’ve already gotten another of her books out from the library.

This book is a Thelma and Louise story for the twenty-first century. It starts when Bea, an elderly widow from Southern California who is out of luck and out of money after falling victim to a scammer. She packs her cat and a few possessions in her van, and drives away from her old life with no real destination. Meanwhile, not far away, fifteen-year-old Allie’s luxurious life collapses when her parents are arrested for tax fraud and she is sent to a group home. With the help of a friend who turns out to be not such a good friend, Allie escapes the group home and winds up on the side of the road. In desperation, she throws herself in front of Bea’s van in the middle of the night, hoping to attract her attention. Bea agrees to let her spend the night with her in the van, but after hearing Allie’s story and getting to know her, ends up letting her stay, as her unlikely travel companion. Together, they travel north through California, Oregon, and Washington, learning more about each other, themselves, and what has been missing from their lives. Their past (well, Allie’s at least) catches up with them in the end, but it turns out neither predictably nor completely absurdly.

This book kept me captivated right from the start. Hyde does a great job describing places and situations, and her characters are special; not perfect, in fact quite flawed, but they’re the kinds of characters you sort of dislike in the beginning but turn out to root for in the end, and not in a forced way. Bea seemed like a grouch in the beginning, and Allie seemed to bee too perfect, but as the book went on, their characters developed in a way that made them more alike than different. Their adventures on the road were fun and unpredictable, and in a way, it was a journey of healing, the further they got from Los Angeles and the more people they got to know and places they got to experience, from the twisty roads of the Oregon coast to the rocky shores of Washington state.

The ending was probably the best part. I won’t tell you what happens, but I’ll tell you what doesn’t happen. One predictable ending: Bea and Allie betray each other and part ways, never to see each other again. Second, even more predictable ending: Bea becomes so endeared with Allie that when the feds catch up to them, she adopts her and they legally become a family. Neither of these things happen, which is really refreshing. The ending is a mix of sad and happy, but overall provides a satisfying close to their adventure.

Oh, and third predictable ending: Bea and Allie don’t die in a fiery car crash or soar into the Grand Canyon.