Has it really been almost a whole month since I’ve posted? It seems like That’s So Jacob is turning into something akin to a monthly blog, judging my summer posting pattern…

Things are just chugging along at my end. The weather is staying kind, even if the mosquitoes are not, and I’m attempting to keep up with all of my TAship responsibilities.

I did, however, finish a book this month, finally. And it only took me until September 20th but I did it. Names on a Map by Benjamin Alire Saenz, done. 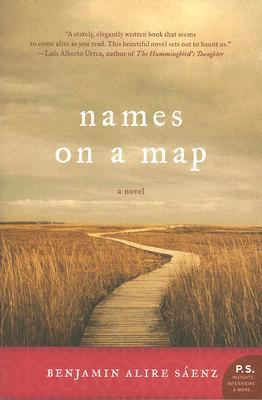 Names on a Map tells the story of the Mexican-American Espejo family, who are living in El Paso, Texas in 1967, with the Vietnam War looming over their existence. The story is told mostly from the perspectives of young adult twins Gustavo, a rebellious pacifist, and Xochil, who is trying to take control of her life. They live with their parents, Octavio and Lourdes; their younger brother, the westernized Charlie; and their grandmother, Rosario, who dies 3/4 of the way through the book and spurs Gustavo’s main actions. In addition, a side narrative occurs in Da Nang, where Adam and Abe are fighting, although their connections with the Espejo family seem rather slim, other than Adam referencing having met Xochil one time in El Paso.

Mostly, the book revolves around the main characters’ relationships with the wars going on both in Vietnam and in their own lives. We find out that Xochil was raped as a young girl, and that Gustavo is attempting to dodge the draft because of a previous disillusionment with violence. In between the twins is Jack Evans, a white, Vietnam-bound schoolmate of theirs who is a former friend of Gustavo’s and a current boyfriend of Xochil’s. He seems to embody all that is the opposite of Gustavo, from white privilege to American machismo, as he faces off against Gustavo and convinces Xochil to “make him a man.” What is interesting about that relationship is that even though Gustavo is devastated once he finds out that Xochil and Jack Evans sneaked away to do the deed, Jack Evans doesn’t come out on top, as Xochil explains to him that she wanted to avenge her rapist on her own terms, and has no intention of marrying Jack now or after he comes back from Vietnam. As Xochil leaves Jack Evans behind, so does Gustavo to America, escaping over the border to Mexico.

Even though the plot is difficult to follow at times and goes in so many different directions, the writing is so poetic and you really get a feel for what this family and the people around them endured in such a turbulent time in America, when lines were drawn in the sand, and twice as deep for minorities such as Mexican-Americans.

I had never heard of this book or its author before I plucked it off the shelf of the Madison Public Library, but it will definitely not be the only Benjamin Alire Saenz novel I read. I’ve already picked up another for my never-ending pile of books.