Yes, writing about the weather is so boring and banal, but I’m not feeling too inspired these days (which is evident if you’ve been to my apartment recently) but it’s gotten really warm and sunny, all of a sudden. I spent several hours outside selling jewelry at the cart on Friday afternoon and Saturday morning, and even though I put on sunscreen, I still managed to get quite a lovely burn on my arms and forehead. It’s only May and I already look like I’m done with summer.

In other news…I do wonder if anyone reading this would be interested in buying some of the jewelry I sell. It’s all made by my dear friend right here in Madison from vintage/recycled materials from all around the world, so think global shop local (I came up with that one!) We don’t have a web presence just yet, but here’s some of the stuff we sell. If you’d like to own any of it, just comment below, I’ll send it to you, and we can work out some type of payment plan or something.

Here is a selection of just a few of the coin earrings that we sell, made from real coins from around the world. They sell for $15 USD, and if you’re interested, just let me know. I took pictures of eight of our stock, from the beginning of the alphabet, and I will take more pictures – we have many more coins, and other items as well – and upload them here sometime. These coins are from Argentina, Australia, Austria, Bahamas, Barbados, Belize, Bermuda, and Bhutan. I’ll send them anywhere…any takers?

Here’s another play of which I’ve been aware of and a fan of for years. I don’t know why it isn’t more popular, because it’s fabulous, unconventional, and exciting. It’s Una tal Raquel (A Certain Raquel) by Nora Glickman, an Argentinian-American playwright. Una tal Raquel tells the story of an unlikely heroine in 1930s Argentina. And it’s all true. 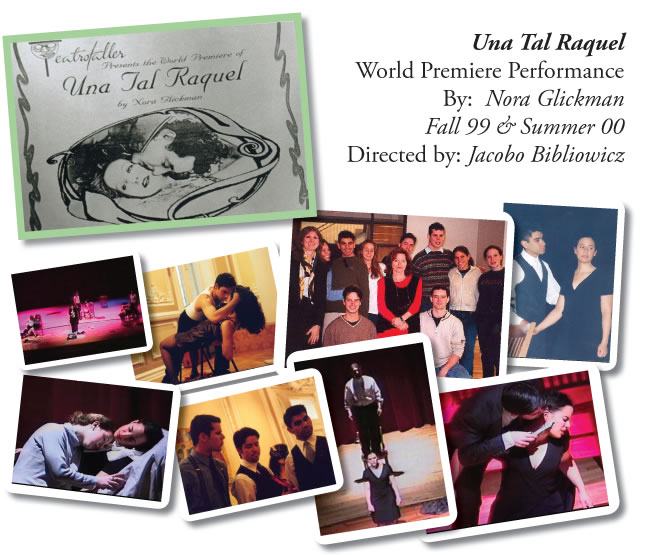 Una tal Raquel (A Certain Raquel) was written in 1999 by Nora Glickman. Its first performance was at Teatrotaller in Puebla, Mexico.

1900-1935, and present day; Buenos Aires, Argentina. We begin with Raquel being questioned by Alsogaray in 1935, as well as by her granddaughter, before launching into the play itself. Raquel’s husband Yaacov fled Poland for Argentina, sending her when he had enough money, only to die shortly after her arrival. Upon meeting Bronia Koyman, Raquel gets involved with the Zwi Migdal, a vast Jewish mafia responsible for the operation of casitas, or brothels, all over Buenos Aires. Unlike the seamstress job she thought she’d have, she becomes one of Bronia’s girls. She learns the gravity of the situation during a night out at the theatre, where an unruly mob catches her and Bronia in the balcony while watching a production of the play Ibergus, in an act of meta-theatre. Although Raquel arranges for Max to “buy” her at an auction so that she can go on with her life, a trick mock wedding to Korn puts her right back where she started. Finally, Raquel gets the courage to go to the police, and the prostitution ring of Zwi Migdal is busted.

I was in love with this play when I first read it; rereading it for this feature, I saw a few things that I didn’t see earlier, such as the fact that Glickman kinda “yada-yadas” over the good part. It’s not too clear how Raquel gets to the police, or why she waits so long to do it. Raquel also has her weak moment, when she falls into the trap, and seriously, you could see it coming from a mile away.

Glickman’s stage directions, with the creative use of props and music to create the set, are exquisitely well-thought-out. I’d play it as is and see how it goes. Maybe add in more Argentine tango.