And so it begins…

Not just the semester, but the laziness, the over-tiredness, the slacking on blogging that comes with settling back into the Madison groove.

Before I go back and edit my last Charlottetown travelogue post, here’s a review of the two main-stage shows I saw when I was there. 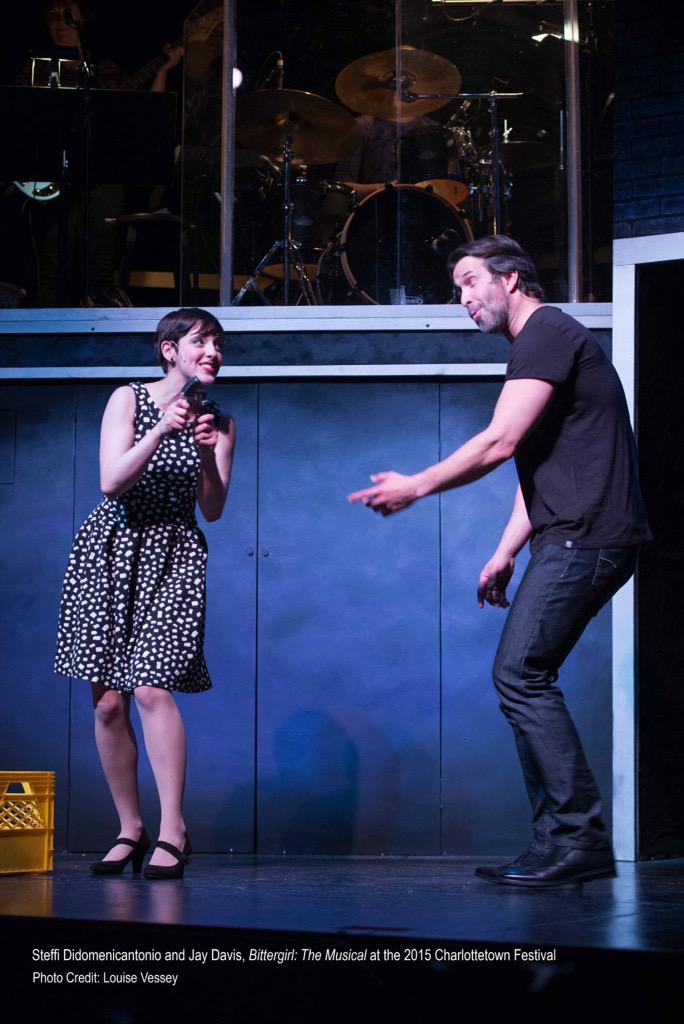 First up, Bittergirl, the story of three women in various stages of relationships – one dating (Marisa MacIntyre), one co-habiting (Steffi DiDomenicantonio – try fitting that on the back of a baseball uniform), and one married (Kathy Auerbach) – with one man (played by Jay Davis) representing all three of their partners. At the beginning, each of their respective partners breaks it off, and together and separately, they go through the motions of how to deal with the breakup through classic girl-group songs of the 60s, 70s, and 80s, and through it all, come out on top. It was performed cabaret-style, with the actresses sometimes walking around the audience, seated at tables. I saw it on Saturday night at the Mack. For $35, I got lucky enough to be seated front-row center with a lovely family from Boston. Together, we laughed at the jokes and I hummed along to such re-interpreted favorites as “He’s A Rebel,”  “I Hear A Symphony,” “Tell Him,” “Be My Baby,” and the finale number, “Too Many Fish in the Sea,” during which Kathy Auerbach came offstage and gave me a hug while she was singing!

Overall, an evening full of oldies and fun. The only weak spot was probably Jay Davis as The Man. Reasonably attractive, but no match for the three ladies, especially DiDomenicantonio, a combination of Anne Hathaway and Liza Minnelli who arguably was the star of the show. Davis’s vocals weren’t as on point, and I often found myself bored during his songs, but maybe that’s because I was just so entertained by the other three.

Two nights later, at the Confederation Centre for the Arts, it was time for Canada’s longest-running musical, Anne of Green Gables. The house was packed, but $50 got me a reasonably good seat house right, seated with three generations of women from Miramichi, New Brunswick – the town I woke up in without knowing where I was – who’d made this a yearly tradition. Of course, it was well worth it, and well-rehearsed. The strongest actors were those who played Anne, Matthew, Marilla, and Diana; very impressive. The plot followed the books pretty well, but left out a few key points, especially one of my favorite incidents, the one about Anne lying about Marilla’s brooch to make her feel better. The costumes and lighting were spot on, but the sets looked a little on the rickety side. On the downside, the songs were cute but not the most inspired, and the second act kind of veered away from Anne, until the pageant scene. Overall, it’s a show that was magical on Prince Edward Island, but probably would fall a little flat elsewhere.