I’ve actually been getting quite a lot of reading done lately, and the two latest books I’ve finished, I’ve realized, have quite a few similarities other than the facts that they both have letters in their names. They are Generation X by Douglas Coupland and The End of Mr. Y by Scarlett Thomas. So, it’s a double book review! 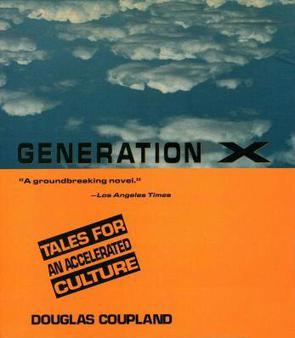 Generation X by Douglas Coupland is kind of about nothing. It centers on the lives of Gen-X twenty-somethings Andy, Dag, and Claire, who spend their days flitting between occupations and locations in southern California, and telling long personal stories with convoluted meanings. Overall, I felt like it didn’t have too much in the way of meaning, possibly because I’m technically a Millennial, but some of Coupland’s self-coined terms made quite a lot of sense. And – fun fact – this novel popularized the term McJob, referring to a low-wage job with little prospect for advancement and skill-learning, as well as the titular Generation X, or those born in the 1970s and early 1980s. The End of Mr. Y by Scarlett Thomas is the polar opposite, in that it almost has too much meaning. The book takes place in England, where protagonist Ariel Manto is searching for answers about an extremely rare book, also entitled The End of Mr. Y, which is believed to have caused the deaths/disappearances of all who have read it, including Manto’s Ph.D. advisor. Eventually, Ariel learns about the Troposphere, a location within the mind, sort of everywhere and nowhere, a parallel universe where you can jump backwards and forwards in time through inhabiting peoples’ consciousness. I liked this book, but it also kind of scared me with its extremely existential nature.

It is interesting that I read these books in succession. They have a lot in common, despite their stark differences; one is America, the other in England; one is about pointlessness, the other is about possibility. Both, however deal with the importance of the meta-narrative, and how it gives the characters dimension as they learn along with the reader. True, sometimes the reader gets lost in the universe; for example, at some points in Mr. Y I had no idea whether Ariel was in the dreamlike Troposphere or her real existence, and in Generation X I was sometimes unsure of who was narrating and who the story was actually supposed to be about.

Overall, though, both books are quite a trip for the curious mind to embark upon. I think I need some lighter reading for the next few books on my list.