Hey there friends. It’s 11:25 PM here, and I’ve done just about nothing today. I tore up my closet looking for shit, then I cleaned some of it up, so now it’s a cleaner pile of shit, but I still have plenty of other shit that’s been there for a year in a box that I haven’t sorted through. I think I had maybe two meals total, because everything is fattening and I’m doing enough sitting as it is. I did manage to get out of the house to get my mail, and go for seudah shlishit at the Gellers’ new place.

Basically, I’m just kind of waiting for school to start back up again, but I’ve fallen a little bit into the Madison routine: waking up later than I intended to, spending too much time on YouTube and BuzzFeed, eating whatever, postponing exercise (two days running!), think about blogging something and watch Golden Girls reruns at night, which I’m doing right now.

Plus, it’s either super hot or super cold in my apartment, and right now it’s super hot, so I’m going to make this post quick and then adjust the temperature and get into pajamas.

I only gave broad strokes about ATHE, but I actually wanted to remember more details about Joan Lipkin’s awesome devising workshop, and the final performance of the three-hour session. Joan split us up into groups of five. My group consisted of me, Margaret from Nova Scotia, Sarah from Missouri, Christine from San Francisco, and Ron from Georgia. The assignment: share a story of a time when you were disappointed as a child, or you didn’t get something you wanted, then pick one story and make it into a short play. I told the group about six-year-old me, and how I wanted a really pretty cake from the store, with sea animals on it, and my parents refused to get it for me because it was way too expensive. We all shared our stories, and my personal favorite was Margaret’s, about her doll. She had a ragged doll that she slept with every night, until one day when her mother, not knowing its sentimental value, threw it away, devastating her. The doll also comforted her when her parents fought in the next room. When it came time to choose a story, Margaret said, “oh, not mine. It’s so silly,” but the rest of us saw a great story in it, so she reluctantly coalesced.

As soon as we started devising, the ideas flew. I’m usually not the leader in a group setting, or even listened to, but I felt validated when I offered opinions on how it should be. Christine is a director in real life, and I was surprised when she seemed glad to listen to others’ ideas; it was an exercise in devising, but also proved to be an exercise in collaboration and communication. Margaret played herself (a choice she later regretted, but we encouraged her to explore playing her own character). Christine and Ron, as the older couple, played Margaret’s parents, and Sarah, with her lovely red hair and blue and white polka dot dress, was a perfectly darling doll. As for me? I decided to be Margaret’s bedroom door. Inanimate objects suit me well.

We went first, and called our piece Teresa.

We began by entering in a line. I led, walking backwards, and then stood to the side to let Margaret and her doll into the room. Christine, as Margaret’s mother, kissed her on the cheeks, saying in Dutch, “Valtrusten (good night), Margaret,” and closed me. As Margaret sang a Dutch lullaby to herself and her doll, Christine and Ron pantomimed arguing in the background. We repeated the scene twice more, with Sarah getting gradually limper, Christine getting gradually wearier, the fight getting more hostile, and Margaret singing even louder. The next time we repeated the scene, after the goodnight kiss, Christine tapped Sarah on the shoulder, and she followed her out of the room and shut the door. Sarah hid, and then Margaret woke up. Looking around for Teresa, she threw open the door and engaged in this dialogue.

Margaret slinks away back to her room, and sings a few lines to herself before curling up to sleep, and the play ends as I creak from the open position (perpendicular to the audience), to closed position (back to the audience).

I think Margaret had it recorded on her phone. I hope it surfaces somewhere, because it was darn good, and I learned some Dutch.

And that’s how I portrayed a dramatic door.

As I was sitting in my Irish drama class, something happened that made me think about Friends. It was something about something from history that I learned from Friends that I’ll never forget. And of course, I forgot it. So, I spent an inordinate amount of time looking for quotes from the show to trigger my memory. But I did realize that Friends taught me a lot of things that if I hadn’t watched it, I wouldn’t know. It sounded like a good blog post, but then I went on the Internets and found a bunch of other people beat me to that idea.

One of the topics we discussed today was historiography, and the interstices/lacunae between previous scholars’ work, so to that effect, here are the top six things that I learned about history from Friends.

6. World War I was also known as The Great War.

And we fought against Mexico…wait…that can’t be right.

5. Where Dutch people come from. 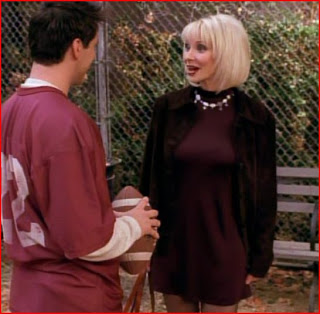 Not to be confused with Never-Never Land. Thank you Amsterdam, good night.

3. When the dinosaurs died.

2. Joseph Stalin is not a good stage name.

Turns out he’s a real person.

The more you know!