This is a play that I thought I had read, but it turns out that I hadn’t, and it’s now public domain so I can do what I want, bwahahaha.

Before I finish writing this post, I just have to say that I’m really not loving this new block editor. I used to be able to toggle back to the old style, but now I can’t. I’m hoping to avoid either writing posts in Word or Google Doc and then copying and pasting them, but one of the reasons I’ve been avoiding blogging is because this editor just plain sucks. How do you manage to get around this problem?

Happy St. Patrick’s day, y’all! In honor of the obligatory day each year Americans become Irish in order to have an excuse to drink (and it’s a Friday this year, so of course it’s going to be a big, soggy mess), here’s a play from Ireland.

A few weeks ago, hiding in a corner of one of the bookshelves at the library was a tome entitled 13 Plays of the Ghosts and Supernatural. Naturally, I was intrigued, so I picked it up. I was delighted to find that rather than a bunch of boring classics or plays by nobody I had heard of, it contained a sweet little selection that crossed borders and genres. It’s been sitting at the bottom of various book piles ever since I got it, but I decided that today would finally be the day I’d pick one, read it, and write about it. So here’s an oldie, but a goodie: Purgatory by Ireland’s own William Butler Yeats. 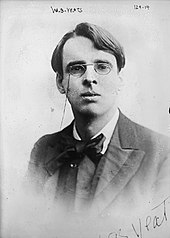 Undated photo of the playwright (Wikipedia)

Purgatory was first produced at the Abbey Theatre in Dublin, Ireland, on 10 August 1938.

Sometime, a ruined house with a bare tree in the background. The old man tells to the boy the story of his parents and this house, which was once theirs, alluding to people he sees in the windows which the boy cannot. After the old man tells of how his father was murdered in that house, and that he was the one who did it. He then demands that the boy – his son – hand over his backpack which is full of money. They struggle, breaking the bag and spilling the money on the ground. The boy threatens to kill the old man, but as he is distracted by the appearance of the silhouette of his grandfather’s ghost in the window, the old man stabs him with the same knife he used to murder his father.

A short and thought-provoking piece that seems to give the reader more and more with each read. It’s written in kind of a modified rhythmic verse, which gives it a creepy edge; it doesn’t quite have a rhyme or a meter scheme, but seems to be purposeful in its pacing. The fact that the two characters are a father and son, and that rather than the perpetuation of the cycle, with the son killing the father, the father kills the son instead, thus breaking the cycle. But perhaps, in a way, sending the old man to purgatory, forever condemned to live and relive the murders of his own father and his own son.

Over and Over Again

OLD MAN: But there are some

That do not care what’s gone, what’s left:

The souls of Purgatory that come back

To habitations and familiar spots.

BOY: Your wits are out again.

Their transgressions, and that not once

But many times; they know at last

The consequence of those transgressions

Whether upon others or upon themselves;

Upon others, others may bring help,

For when the consequence is at an end

The dream must end; if upon themselves,

There is no help but in themselves

There’s this eerie quality about it. The old man speaks of purgatory and warns of what it entails. He seems to remember quite a lot; the type of binding of the books in the house, the exact conditions of the night when he was conceived. And when the boy starts to see the ghosts he has been denying, it’s almost as if he’s seeing into his father’s past.

After the old man stabs the boy, the stage darkens except for the only other thing on stage: the tree, surrounded by white light. Even though people have been murdered and one day the old man will die too, the tree has clearly been there since the old man was a boy and will continue to stand there after the man is gone. A bit reminiscent of The Giving Tree. But unlike the man and the boy, the tree cannot perpetuate a cycle of violence or procreate in the same way man can, just silently oversee the events in its presence.

A Horse, A Horse

Hoofbeats that are heard only by the old man, and not the boy. Horses seemed to contribute to both the birth and the undoing of the old man; his father was a groom in the stable owned by the family of the woman who would become his wife; he rode up to the house on a horse in order to sneak in and sleep with her; and he lost all her money betting on horses, sending his son, the old man, away. The old man kills his father out of rage, and the boy because he cannot bear the thought of him procreating with someone, potentially like his father and mother did. The logic is twisted – maybe it’s me – but there’s something about horses and sexuality that is really driving this old man to do these things.

For some reason, I’m seeing black and white. Like, paper cuttings. The house is described as black and charred, after the old man’s father burnt it down while drunk, and the tree is in a white light. Purgatory itself is described as a gray area between heaven and hell, so I think my designs would incorporate that grayscale; no color at all. A lot of shadowing and dimensioning could be fun, especially with the outlines of the ghosts in the window, and possibly some sort of giant horse projection or something. For some reason I’m also thinking snow, and a lot of sharp angles, maybe even a leafless tree, one that almost looks like a tall hitching post rather than a tree.

I’ve probably had too much to drink (actually, I’ve had nothing at all to drink) but I managed to start and finish a Flip the Script in one sitting, so that’s something.

And this is what I learned in grad school this week and just spent an hour of my life doing.

Oh, and here’s the rough draft, which was significantly less pretty…

Okay, it was hideous, but I tried.

One of the courses I’m taking this semester is a seminar in Irish drama. I don’t know much about Ireland and Irish playwrights as I probably should, hence the reason for taking the class. The reading list is gigantic, and with ten readings to be read before Tuesday, I spent the majority of my Saturday not reading them and have only read twenty pages into the first.

Reading an Irish play can be tricky. The language is colorful, to say the least, and it’s written in a dialect. It’s taken me the better part of an hour to read what I have so far, but I’ve been double dipping between reading and watching SNL. This sketch is kind of dumb.

But anyway, back to the play. The one I’m reading is Colleen Bawn by Dion Boucicault. The plot is fairly straightforward, and I’ve already learned two fun new words. And both of them have the same meaning.

First, spalpeen. Originating in the late 18th century, it can be pronounced either spal-peen or spal-peen. Versatile. According to Dictionary.com, it means “lad, boy, rascal, or scamp.”  It comes from an Irish word meaning “hired laborer.” I like the World English Dictionary’s reference to “rascal or layabout” better. I like this word because it doesn’t sound like anything in English, and is slightly sexual in nature.

Another fun one is blackguard. You may have heard this from the Family Guy episode where Stewie dresses up a la Tootsie to get a role on his favorite TV show, Jolly Farm Revue. I didn’t know what the word meant or even if it was indeed a real word. I actually thought it was “blaggard” because that’s how it’s pronounced, although saying it as if it were a compound of “black” and “guard” is also acceptable. And racist. Defined as “scoundrel,” the word refers to menial workers, who were often called the black guard. My favorite feature of this word is that it can be used as a verb or even an adverb, blackguardly, as in, “My man blackguardly left me with three kids and no money.” Now it’s not only racist, but doubly racist.

I…should probably not incorporate those into my daily speech. Maybe the world’s not ready for them yet.

But they still count in Words With Friends.