When we last left our hero, it was last Wednesday, and…

I know I’ve been AWOL lately, but this week has been so crazy. So, so, so crazy, trying to keep up with all of you, my internet friends, in addition to the non-online-life thing. Today started with rehearsal at 9 (first one there – oh yeah!) to 1, then a meeting to 1:30, then four bites of lunch and class from 3:30 to 6, then representing APO at the student org fair from 6-7:30, then a failed gym attempt (thanks, random nosebleed and everyone who decides to go to the gym at the last moment), and then Latin dance from 9:30-10:30. I will update this more tomorrow, I promise, but get ready-set for another episode of Flip the Script right about here, with one of my most recent reads (for class, but still a great script that’s already been flipped). Of course, I’m talking about The Post Office by Rabindranath Tagore. Stay tuned.

So, dun-da-dun, it’s back and it’s ready to get flipped. Mostly because, once again, I’m exhausted and can’t think of anything other than school at the moment. It was a relatively light reading week, hence I finished one book and almost another, and this play is still on my mind. 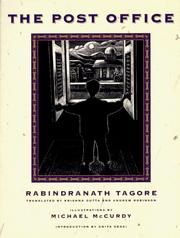 I realize I haven’t been doing much justice to this series, but in an effort to maintain some consistency and a higher-quality post, I’m going to reference back to my Which Way, Big Man? post, and style accordingly.

So here we go, for the first flipped script of 2015: Rabindranath Tagore’s The Post Office. Written in India in 1911 by Rabindranath Tagore. Originally written and performed in Bengali and titled Dak Ghar (The Post Office). Its first translation into English was brought to life by W. B. Yeats at London’s Irish Theatre, with Tagore himself in attendance. Other important productions include a French radio production in 1940, translated by Andre Gide and broadcast the night before Paris fell to the Nazis, and a 1942 production in the Warsaw Ghetto by the children of Janusz Korczak’s orphanage, none of whom survived the war.

The play takes place in the home of Madhav Dutta, specifically, in and around the bedroom of his adopted son, Amal. Amal is slowly dying of an incurable disease, and one day, he notices that there is a new post office being built. Through wishful thinking and some prodding, Amal is led to believe that one day he will receive a letter from the Raja. Though Amal is mocked, he keeps believing in a future, either as a pen pal of the Raja or as a postal worker. He prepares for this by interacting with everyone who comes to his window, announcing plans to become a beggar; announcing plans to play outside one day with some boys, to whom he gives all his toys; and asking Shudha, a flower seller, to be his friend and come visit later. The illiterate Amal is led to believe that a blank piece of paper is a personal letter to him from the Raja, much to the chagrin of Madhav. Finally, the Raja’s herald and physician arrive, to announce the arrival of their leader. Though Amal has become progressively weaker as the adults commiserate, he either dies or falls asleep with a smile on his face, not knowing any better. He then gets a visit from Shudha, the flower girl who said she’d return to play with him, bearing flowers.

For such a teeny, tiny play it certainly packs power. It is not hard to see why a place in crisis like WWII-era France or Poland would understand this piece; it is simple and presents a variety of messages. It is Amal’s journey towards his own death, but there is more than one way to see it. It could be that he sincerely does not know what is going on around him, and that ignorance (or fantasy) is bliss. It could also be that he is accepting his fate, showing it by bequeathing his possessions and saying his last rites, or that he is resisting the slow, inevitable march to death by fantasizing about friends, flower girls, and unfounded futures. It can be seen as a story of hope, or as a story of despair.

One of the undervalued plot points is the play’s commentary on literacy. It is not explicitly stated what age Amal is, only the fact that he cannot read. In some cultures, children as young as 4 can read, but there are plenty of adults out there who are either illiterate or functionally illiterate. A blank piece of paper that Amal perceives to be a personalized letter brings him hope. Whether he believes himself or not is the question, but assuming he thought that it said something and not nothing, it does give him enough hope to last for a short while longer. When a person who cannot read is given a written message and not its interpretation, it says whatever the person wishes it to say, giving the element of wish-fulfillment as well as that of hope against hope. Sometimes, when you get that dreaded letter or email, don’t you wish you were illiterate, so you could remain unaffected by it, remain in a state of bliss? Had Amal been able to read, a great deal of his worldview would be turned inside out. I feel like Tagore is saying that society’s lack of literacy is a double-edged sword; it can lead to misinterpretation and misunderstanding, but it can also delay, if not obliterate, problems.

The protagonist, Amal, exists in a world full of adults, and when he sees other children, he is overcome with joy. He is so happy to see other boys that, against his better judgment, he offers them all his toys, and asks them to come back and play with him to which they say yes. When Shudha comes around, even though he has nothing to give her, he asks her to come back as well. The boys do not come back, yet Shudha does. What I got from this: you can give away everything you have to someone, and they can take it all away, but the person to whom you want to give everything is the one who is the true giver in the relationship. Shudha’s return can also be seen as a hint at the romance and love that will never happen for Amal, if you want to into those undertones, representing children not being born to the children who would be their parents dying as children themselves. I’ve often thought about those high-profile child-murder cases; you gotta wonder, if they hadn’t been killed, who would they grow up to be? Who would they marry, and who would their kids be? I’ll risk sounding cliche, but Shudha’s unwavering faith and sense of duty can be seen as the mark of femininity, or of the “caring woman/goddess,” who never abandons her creations. This can be seen through the last line of the play, which Shudha tells Madhav to relay to Amal when (if) he wakes:

SHUDHA. Tell him, “Shudha has not forgotten you.”

This would be a great play for contemporary young audiences. I could even see it being done in hospital wards, a la Godot in the prison system. For some reason, I see comic book panels and primary colors, or hospital-pastels. It could also be an adorably poignant short film.