And after a month way too busy for words (as evidenced by the lack of entries), I’m back. I don’t know how much I’ll be posting, but it’s Friday the 13th, so I thought it would be appropriate to bring back Flip the Script Friday with a selection from 13 Plays of the Ghosts and the Supernatural. Today’s selection? The Uninvited by Tim Kelly.

The Uninvited is based on a novel by Dorothy Macardle. It was made into a movie in 1944. Interesting facts (about the movie): the screenplay was written in part by Dodie Smith, and it was apparently “the first movie to deal with ghosts as entities rather than illusions or misunderstandings.”

A house on a cliff in Cliff End (western England), “the present.” Keep in mind that this play was written in the 1940s. The entire play takes place in the drawing room of a country house. Stella is selling the house, against her grandfather’s wishes, to Pam and Roddy, who come with their sassy maid, Lizzie Flynn, AKA the true star of the show. Weird things happen right from the start, when Pam feels a chill in a random part of the room. Strange goings-on at their housewarming prompt the four friends (Pam, Roddy, Max, and Wendy) to investigate the mysterious deaths of Stella’s parents, Llewellyn (a painter), and Mary (whose portrait hangs above the fireplace), at the possible hands of Carmel, a Spanish woman who lived with them as well, when Stella was a baby. Wendy leads the group in a seance, which brings some spiritual activity, eventually revealing some truths about the Meredith family. Oh, and in the end, Pam suggests that Roddy write a play about everything that’s happened, which is a major eye-roll moment.

A creepy old house wouldn’t be complete without flickering lights, odd smells, and random noises. In this case, the light is a night-light that comes from the nursery where Stella was raised, in addition to a weird glow around the portrait of Mary; the smell is that of a distinctive mimosa; and the sounds of crying, and a music box. The spirits are very much present, possibly linked through their artifacts, despite no one in the Meredith family currently residing in the house.

The centerpiece of the play is a painting of Mary Meredith, the former matriarch of the Meredith family who died mysteriously, and whose painting Pam desperately wants to give Stella. Commander Brooke, for some reason, staunchly refuses that it be moved, to which I’m like…wow, it’s not even your house so stop micromanaging. Many of the arts are represented, including theatre (Wendy, an actress); literary (Roddy, a writer), and visual arts (Max is a painter. We never really find out what Pam does for a living). Wendy, Roddy, and Max have the most in common with the spirits. Although it’s Wendy who leads the seance and gets possessed, and Max who recognizes the woman in the mysterious sketch Roddy and Pam find in the house, it’s Roddy who eventually faces the spirits head-on.

It seems like a pretty interesting living room drama, akin to Blithe Spirit. It would need some retooling in order to see it in “the present,” but it might work. The special effects would be fun to work with, especially with the color blue, and the very descriptive scene where Stella sneaks into the house and communicates with the spirits of the dead, in a very Poltergeist “they’re here” moment.

Of course, Lizzie Flynn has the best line of the play:

LIZZIE: What sort of heathen mischief are you up to now?

LIZZIE: With whom, may I ask?

LIZZIE: (Dubious) She’s going to come out from wherever she is and talk to you, is that it?

WENDY: It doesn’t happen that way…

WENDY: The spirit will spell out things with the glass.

LIZZIE: What if the spirit don’t know how to spell? (Knock at the front door. LIZZIE is cynical about WENDY’s efforts.) Maybe that’s Mary Meredith. (she exits) 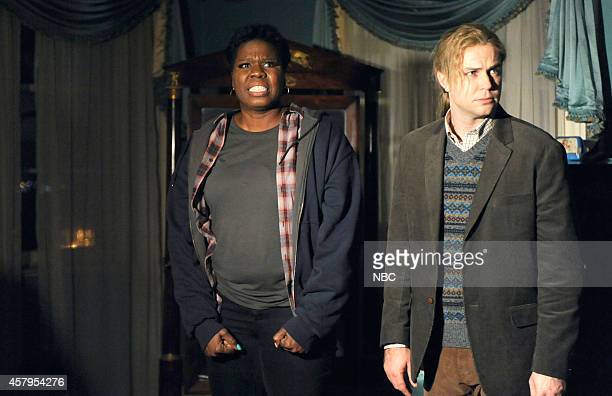